The lesser-known western Japanese town of Matsue lies just off the Japan Sea coast and experiences some pretty cold, wet and windy winters. It also boasts one of the most beautiful natural settings and cleanest environments of any urban center in this long, sprawling archipelago. But Matsue's main claim to fame is its brief association with writer and journalist Lafcadio Hearn, who taught English in its number one school for some fifteen months in 1890-91. This pioneer Japanologist is a focal point of Matsue's tourism promotion, and we were further reminded of him back in September 2004 on the 100th anniversary of his untimely death in the capital Tokyo. 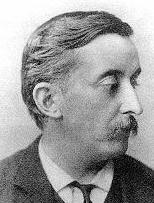 Born in 1850 to an Anglo-Irish father and Greek mother, Hearn experienced a childhood that right from the start was beset with difficulties. His parents separated when he was just six years old, and he was subsequently raised by a great-aunt living in Dublin. At the age of 16 he had an accident that cost him the sight in his left eye, and soon after that came word of his father's death at sea. As if all this calamity were not enough for one so young, his great-aunt went bankrupt and he had no choice but to abandon his schooling.

Forced into economic independence while still in his teens, like many other Irishmen of his day, Hearn crossed the Atlantic to seek a better life in America. He studied and worked as a journalist in Cincinnati and New Orleans for almost 20 years. In 1889, still single, and some say increasingly disillusioned with what he perceived as excessive materialism in the West, he began to set his sights on Japan, a country which was just beginning to emerge from centuries of isolation and now held a special fascination for him. In a sense, Japan and Hearn were at this point in time heading in opposite directions. The far-flung archipelago was in the throes of embracing all things western, the very things Hearn was eager to escape. As it happened, Japan and Hearn ended up learning a great deal from each other.

In the spring of 1890 Hearn landed in the port of Yokohama, and by the summer of the same year he was assigned to teach English at what is now considered the most prestigious high school in Matsue, the administrative and cultural hub of Shimane prefecture. The civil servants and medical practitioners I myself used to teach English to privately in this outback town were prepared to up roots and move house simply to qualify geographically to get their kids into Matsue North High, the name Hearn's old school now goes by. This is because it has established a reputation for itself as the local recruiting ground for the University of Tokyo (where Hearn himself eventually went on to teach), attendance of which opens doors to any top-notch career you care to mention.

After befriending the prefectural governor, Hearn was introduced to — and later married — the daughter of a local samurai family, Koizumi Setsu. To facilitate this union, he was obliged to adopt Japanese citizenship, as well as his wife's family name. Lafcadio Hearn is therefore better known in Japan as Koizumi Yakumo.

In 1891 Hearn moved on to take up a new teaching position in Kumamoto on the southern island of Kyushu. Three years later, while in the employ of the English-language Kobe Chronicle, he was able to return to full-time journalism of the kind he had practiced in America — at least for a while. He reached the peak of recognition in 1896 when he was appointed lecturer in English literature at Tokyo Imperial University, and later on at Waseda University.

A recently discovered letter sent to a friend in London in 1903 appears to reveal a sense of estrangement with Japan toward the end of his life. On September 26, 1904, he sadly succumbed to a heart attack, but not before bequeathing a wealth of unique insights into a land little known to his contemporaries in the Western world.

If you would like to sample some of Hearn's writings, head over to ManyBooks.net, where an assortment of e-books can be downloaded free of charge.