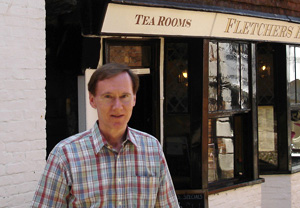 Welcome to my English User Guides. These pages are formatted for your computer screen or iPad rather than the smartphone you carry with you everywhere. Sorry about that, but there is a good reason. Core English learning points are here presented concisely in table form, with clear examples always in view alongside. Excessive scrolling up and down can thus be avoided, which should especially appeal to busy students preparing to sit exams.

Important terms are hyperlinked to their definitions elsewhere on the site, and in the British and American vocabulary glossaries words with differering meaning on either side of the Atlantic are cross-linked for quick comparison.

The color scheme of this 'no-template' website has also been kept simple, with good contrast throughout to make reading easier for all age groups. A recent increase in font size has further improved legibility.

After teaching English in Japan and Sweden for three decades, and also studying various foreign languages, I have to admit my approach to grammar is a rather traditional one. I remain convinced that — just as with safe driving — language acquisition and effective communication are helped along by some basic rules of the road.

So there it is then. Whether you are a native speaker of English or a non-native learner, I trust you will find something of interest. The remaining contents of this start page should serve as a lighthearted warm-up. Send in any comments here, and thank you for today's visit!

How to benefit from ambiguity

Robert J. Thornton, professor of economics at Lehigh University in Bethlehem, PA., was feeling frustrated about one of the worst occupational hazards of being a teacher—that of having to write letters of recommendation for people with dubious qualifications. In an attempt to address the problem he decided to put together an arsenal of statements that can be read two ways, and he called his collection the Lexicon of Intentionally Ambiguous Recommendations—or LIAR for short.

LIAR may be used to offer a negative opinion of the personal qualities, work habits or motivation of the candidate, while allowing the candidate to believe that (s)he is being praised to high heaven. Peruse the following examples and you will soon get the hang of it:

Thornton points out that LIAR is not only useful in preserving friendships but it can also help avoid serious legal trouble in a time when laws have eroded the confidentiality of letters of recommendation.

In most American states, he notes, job applicants have the right to read the letters of recommendation, and can even file a suit against the writer if the contents are too negative. When the writer uses LIAR, however, "whether perceived correctly or not by the candidate, the phrases are virtually litigation-proof."

Professor Thornton's book first appeared back in October 2003 and is published in paperback by Sourcebooks Hysteria at a list price of $14.99.

How to write right
Tongue-in-cheek advice from Frank L. Visco


How punctuation can define relationships

I want a man who knows what love is all about. You are generous, kind, thoughtful. People who are not like you admit to being useless and inferior. You have ruined me for other men. I yearn for you. I have no feelings whatsoever when we're apart. I can be forever happy — will you let me be yours?

I want a man who knows what love is. All about you are generous, kind, thoughtful people who are not like you. Admit to being useless and inferior. You have ruined me. For other men, I yearn. For you, I have no feelings whatsoever. When we're apart, I can be forever happy. Will you let me be? 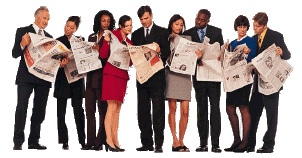 Miners Refuse to Work after Death

Hospitals are Sued by 7 Foot Doctors

Some Pieces of Rock Hudson Sold at Auction

The English lesson
by Anonymous

We'll begin with box, and the plural is boxes;
But the plural of ox should be oxen, not oxes.
Then one fowl is goose, but two are called geese,
Yet the plural of moose should never be meese.

The cow in the plural may be cows or kine,
But the plural of vow is vows, not vine.
And I speak of a foot, and you show me your feet,
But I give a boot — would a pair be called beet?

Then one may be that, and three may be those,
Yet the plural of hat would never be hose;
We speak of a brother, and also of brethren,
But though we say mother, we never say methren.

The masculine pronouns are he, his and him,
But imagine the feminine she, shis, and shim!
So our English, I think you will all agree,
Is the trickiest language you ever did see.

I take it you already know
Of tough and bough and cough and dough.
Others may stumble, but not you
On hiccough, thorough, slough, and through.

Well done! And now you wish, perhaps
To learn of less familiar traps.
Beware of heard, a dreadful word
That looks like beard and sounds like bird.

And dead; it's said like bed, not bead;
For goodness sake, don't call it deed!
Watch out for meat and great and threat,
(they rhyme with suite and straight and debt).

A moth is not a moth in mother.
Nor both in bother, broth in brother.
And here is not a match for there,
Nor dear and fear for bear and pear.

And then there's dose and rose and lose
— Just look them up — and goose and choose.
And cork and work and card and ward,
And font and front and word and sword.

And do and go, then thwart and cart.
Come, come, I've hardly made a start.

A dreadful language? Man alive,
I'd learned to speak it when I was five,
And yet to write it, the more I sigh,
I'll not learn how 'till the day I die.


No wonder they say that English is difficult
by Anonymous

We have to polish the Polish furniture.
To take the lead I must take the lead out of my shoes!
A farm can produce produce.
The dump was so full it had to refuse refuse.
The soldier found it hard to desert in the desert.
A good time to present the present is the present.
At the army base, a bass was painted on a bass drum.
The dove dove into the bushes.
I did not object to the object.
The insurance for the invalid was invalid.
The bandage was wound around the wound.
The first row of oarsmen had a row about how to row.
They were too close to the door to close it.
The buck does funny things when the does are present.
A sewer went down to stitch the tear in the sewer line.
To help with planting, the farmer taught his sow to sow.
The wind was too strong to wind the sail.
My jaw got number after a number of Novocain injections .
She shed a tear when she saw the tear in her skirt.
The researchers had to subject the subject to many tests.
How can I intimate this to my most intimate friend?
I spent all last evening evening out a pile of dirt.

Affixes — The Building Blocks of English

IATEFL (International Association of Teachers of English as a Foreign Language)

TOEFL (Test of English as a Foreign Language)